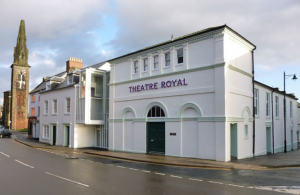 The Theatre Royal Dumfries is over 200 years old, making it the oldest theatre in Scotland. It was originally built as the New Theatre in 1792 as the result of a campaign by actor-manager George Stephen Sutherland.

The building was opened on the 29th of September 1792 with a celebratory performance before starting a regular programme. The New Theatre attracted many famous faces of the day, both on and off stage. Robert Burns was a regular patron, even writing pieces for performance such as The Rights of Woman for Ms Louisa Fontanelle.

In the 19th Century it is suspected that the theatre received a Royal Patent, as the first reference to the building as the Theatre Royal occurs in 1811.

In 1876 the theatre was subject to an extensive renovation at the hands of celebrated theatre architect C. J. Phipps. This renovation expanded the theatre to provide new entrances to the different levels and more space for dressing rooms, as well as making improvements to the interior, some of which still survives as part of the balcony today.

The Theatre Royal has seen many changes since from theatre to cinema and even roller skating rink. None of these changes have been quite as extensive as the recent expansion however, which now adds a new studio, costume hire shop and improved facilities across the building.

The Theatre Royal continues to be owned and operated by the Guild of Players who are the resident company but it also plays host to a variety of touring companies, musical acts and special events.

FLN were involved in the design of the M&E services from conception to completion and handover of the building. As part the work FLN incorporated into the design a number of energy efficient and renewable components including and energy efficient lighting.

FLN were also heavily involved in the design and installation of specialist systems including theatre/mood lighting systems and sound systems.